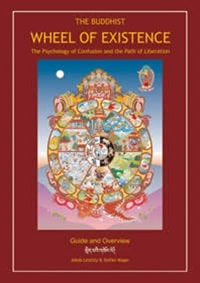 The Buddhist Wheel of Existence Guide

Description: The Wheel of Existence is an ancient Buddhist teaching device that illustrates the realms of confusion, samsara, as well as its causes, conditions and mechanisms. It is said to have been created by the disciple Maudgalyayana according to the instructions of the Buddha himself and is traditionally painted outside a Buddhist temple as a reminder of the suffering of samsara and to arouse determination to be free.This richly illustrated guide takes you through detailed explanations of the six reams and 12 conditions.Buddhism is the fastest growing spiritual persuasion in the world and many people, not only Buddhists, are intrigued by its symbols and images, which share such close parallels with modern psychology.The Buddhist Wheel of Life, (also referred to as the Wheel of Interdependent Origination) is as old as Buddhism itself. The story goes that one of the Buddhas monks had a specially effective way of explaining the dharma (Buddhist law, ideas). The Buddha noticing this talent encouraged him to make a drawing of this teaching. This drawing became the Wheel of Life and a version of it can be found in most Buddhist monasteries. The Buddha said that understanding the Wheel of Life means understanding the Four Noble Truths and vice versa. So this imaginative drawing is very much at the heart of Buddhism. This publication analyses the components and explains them in a concise way interlinking them with modern psychology. We see the Yami, the Lord of Death holding up a shield, which can be understood as a mirror of the self. Starting from the centre, we see three animals representing the driving forces of ignorance, anger and jealousy; then the two paths (beneficial and not-beneficial); the Six realms of Rebirth; followed by the 12 Links of Interdependent Origination.THE AUTHORS:Jakob Leschly is educated in the Tibetan Buddhist tradition and presently teaching for Byron Bay Buddhists/Siddharthas Intent Australia.Designer Stefan Mager is involved with the Aracaria Biodynamic Farm project.